We talk to two senior figures at SVB about the work being done with family offices and venture capital.

With venture capital investment all the rage, and requiring the kind of âpatient capitalâ that family offices can provide, an organization with feet in both camps is Silicon Valley Bank. It is a firm with a sense of mission in family officesâ future.

Some 14 months ago, SVB bought Boston Private, deepening its connections to the evolving family offices space as well as other business lines. When it did so, one prominent individual who became part of the SVB operation was Bill Woodson, head of strategic wealth advisory and family enterprise services; he is also the co-author of The Family Office: A Comprehensive Guide for Advisers, Practitioners, and Students. (He is also involved with the UHNW Institute, for which this news service is the exclusive media partner.)

On the other side of the US, meanwhile, is California-based Shailesh Sachdeva, managing director in the family office practice at SVB. Between them, they bring a lot of insight into what ultra-high net worth individuals, families and business owners are looking for. Family Wealth Report recently spoke to them.

Family offices and venture
The increased visibility of family offices and their involvement in fields such as VC is where Sachdeva comes in. At SVB, venture investment in the US almost doubled in 2021 with more than $330 million being deployed, compared with $166 million in 2020, he said.

SVB has created a âmaturity modelâ to show FOs the different stages of learning and experience in making VC investments. That journey can take years, or months if FOs are active in the venture ecosystem, he said.

âThe innovation ecosystem is exploding,â he said, referring to networks of VCs, other investment groups, family offices, etc. âI donât see a slowdown in new funds being formed. At the end of Q4 2021, there were over 2,500 US funds actively raising capital,â he said, citing SVBâs State of the Markets report. New sectors that are going to be interesting include space tech, blockchain, automation, robotics, Web 3.0.

There is interest in areas such as diversity and inclusion in the VC space, Sachdeva continued. âThere is more interest in FOs investing in diverse VCs and in female-led firms.â

The macroeconomic environment â such as that of rising inflation â is becoming âa point of conversation for family offices,â he said when FWR asked about the matter. âThey arenât stopping their venture capital investments but slowing them down. Theyâre taking a little longer to look at each opportunity and do their due diligence. This has changed slightly from last year when there was a record number of deals â over 17,000 VC investments in the US in 2021.â

Initial contact to SVB comes from referrals from other family offices, he said.

Depending on a family officeâs experience, some prefer to go for the fund of funds model of VC. âAs they progress and get to know the asset class, they want to get more direct, or co-invest,â he said. Family offices can and do build deals in-house and go directly into startups.

Asked to give more detail on the SVB âmaturity modelâ for family offices and VC, Sachdeva illustrated it with the following chart: 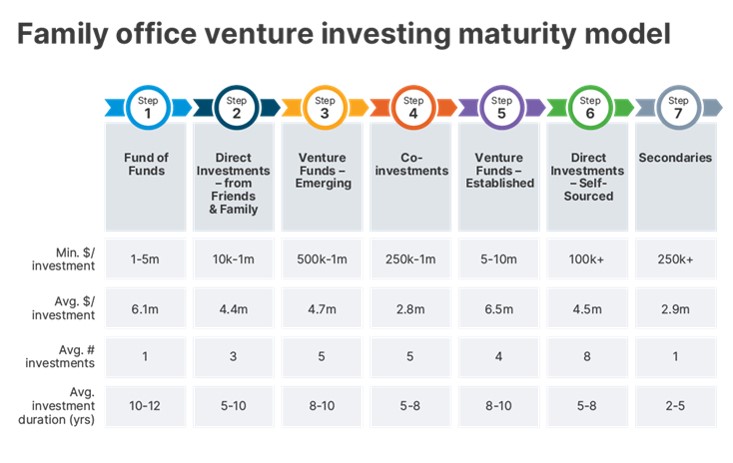 Based on SVB Capitalâs Family Office report, returns from family officesâ venture investments exceeded expectations: the average internal rate of return (IRR) for their VC portfolios was 24 per cent in the 12 months prior to data collection, versus 14 per cent in 2020.