Putting a price on carbon emissions makes polluting energy sources expensive and provides an incentive for emitters to reduce them. That's the theory. What it looks like in practice is assessed by the head of investment strategy at RBC.

With carbon dominating discussions, it is crunchtime at the COP26 summit in Glasgow. But what carbon market mechanisms are already in force and how reliable are they in bringing emissions down in meaningful ways? Author FrÃ©dÃ©rique Carrier, managing director and head of investment strategy at RBC Wealth Management, examines the landscape, explaining how mandatory carbon pricing is put into practice, either through cap-and-trade regulations or a carbon tax. She also looks at the viability of voluntary carbon offset programs, which critics regularly scorn for letting the worst laggards off the hook. There is a lot to take in here, and it is a good time to revisit these market approaches to see where they are succeeding or need reforming. As Carrier points out, a main focus of COP26 in the final week is pricing carbon. How then should investors take this new business expense into account?

The editors are pleased to share these insights and invite readers to respond. The usual editorial disclaimers apply to contributions from outside organisations. To comment, email tom.burroughes@wealthbriefing.com and jackie.bennion@clearviewpublishing.com.

Putting a price on carbon emissions
Increasingly, countries are making pricing carbon emissions mandatory, either by enforcing cap-and-trade rules or by imposing a carbon tax. But with the pace of government regulatory support varying dramatically from country to country, many companies are also trying to offset their emissions voluntarily, in response to the growing cohort of environmentally-conscious consumers and the increasing influence of environmental, social, and governance (ESG) funds.

How should investors take this new business expense into account?
For investors, it means that this additional cost of doing business from emitting carbon, should be taken into account. We explore how mandatory carbon pricing is implemented, either through cap-and-trade regulations or taxes, and explore some popular voluntary carbon offsets.

Focus at COP26
The 26th UN Climate Change Conference (COP26), in Glasgow, this week, is widely regarded as the most important climate conference since the 2015 Paris conference, which gave rise to the Paris Agreement. Ratified by close to 200 nations, the Paris Agreementâs goal is to keep mean global warming well below 2 degrees Celsius (3.6 degrees Fahrenheit). To achieve this, signatory countries will need to decrease emissions by close to 50 per cent over the next decadeâan enormous challenge. A main focus of COP26 is carbon emissions' pricing.

Putting a price on carbon emissions makes polluting energy sources expensive and provides an incentive for emitters to reduce them. The concept is based on the increased recognition that the cost of emitting carbon dioxide (CO2) should be factored into the cost of production by emitting companies, much like a chemical company that dumps harmful residues in a river or landfill, causing health problems for people who live nearby, should be accountable.

Mandatory pricing of carbon emissions
An important feature of the mandatory carbon pricing is that carbon emissions must not only be priced but also become increasingly costly over time. Some countries are making pricing carbon mandatory either through cap-and-trade regulations or through carbon taxes, while some, such as Canada, use both. By putting a price on carbon emissions, US companies using an internal carbon price, including Microsoft and Mars, say it helps them to drive low-carbon investment, energy efficiency, and seize low carbon opportunities.

Increasing momentum for cap and trade
Cap and trade refers to legally binding regulations that cap total emissions and allow companies to trade their allocations. Cap and trade is not a new approach; it has been used to tackle environmental problems in the past. Putting a price on sulphur dioxide (SO2) emissions, introduced under the Clean Air Act, is largely credited with helping to solve the acid rain problem in the 1990s.

Cap and trade has grown in importance, albeit slowly. There are more than 60 cap-and-trade programs in operation across four continents in jurisdictions making up 54 per cent of global GDP and covering 16 per cent of global greenhouse gas emissions, up from less than 5 per cent 10 years ago according to the International Carbon Action Partnership.

The most developed programs are regional. The EUâs Emissions Trading System (EU ETS) established in 2005 remains the most liquid. Beyond this, a number of countries, provinces, states, and cities operate a cap-and-trade program.

The US is home to the Western Climate Initiative (to which Quebec is also a signatory) and the Regional Greenhouse Gas Initiative for 11 East Coast states, while the UK stopped participating in the EUâs scheme by launching its own program. Promisingly, in July 2021, China launched a nationwide program focused on the thermal power industry, which accounts for 40 per cent of the nationâs emissions. China is responsible for over 25 per cent of global emissions, compared with 11 per cent for the US and 6.4 per cent for the EU 27 (excluding the UK), according to the Rhodium Group.

With the US returning to the Paris Agreement and China establishing its own emissions trading program, most observers see a growing momentum for cap and trade as an effective mechanism for driving a meaningful reduction in carbon emissions.

How does cap and trade work?
By assigning a price to a damaging activity, cap-and-trade rules provide companies with a financial incentive to reduce emissions by themselves. All cap-and-trade programs set emissions' limits compatible with their nationâs CO2 reduction targets and calculated by governments and policymakers. Typically, these limits, or caps, decrease gradually over time toward a predetermined reduction goal. 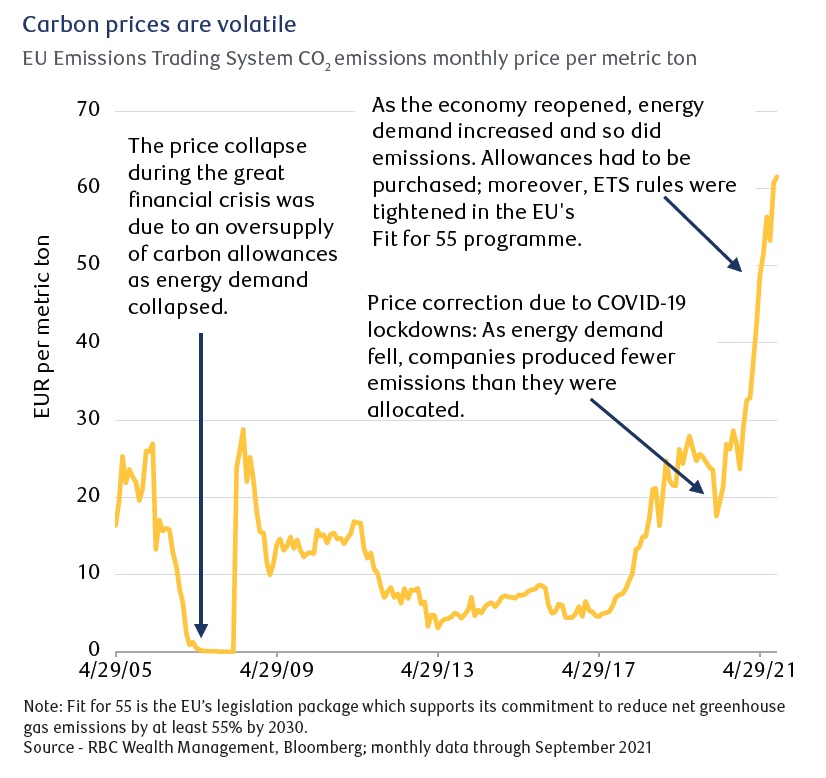 Pricing Carbon: What Are The Options?