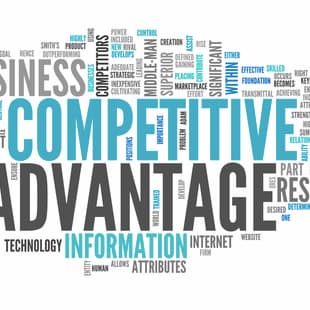 The study revealed massive variations in the concentration and fragmentation of major banking sectors worldwide. The US market is one of the most fragmented, while Canada's is one of the least.

Moves by major banks such as Citigroup and HSBC to concentrate on certain âhomeâ markets is driven by a hunger for improved return on equity in a sharply competitive environment. There is a clear link between âscaled market shareâ and return on equity, a report by Credit Suisse has said.

The âscaling homeâ strategy is wise, the Swiss bank said, because buyers and sellers of consumer banking assets have a chance to win higher returns.

Credit Suisseâs analysis also revealed huge variations in how fragmented major industrialized nationsâ bank markets are, with the US among the most fragmented and Canada one of the least.

So far in 2021, Citigroup has announced that it intends to exit consumer banking in a number of Asia/EMEA markets, BBVA has sold its US banking operations to PNC Financial, and HSBC is exiting retail banking in the US and has announced its intention to exit retail banking in France. In the cases of Citigroup and HSBC, the firms are focusing more on wealth management, seen as offering superior margins.

âThis conclusion is borne out by our look at the accretion realized by Citigroup as the seller and Itau Unibanco as a buyer of Citiâs Brazilian consumer banking business,â it said. âThe conclusion is equally consistent with our work on Commonwealth Bank of Australia, Singapore-based DBSâ market share consolidation across its existing Asian markets and BBVAâs sale of its US banking operations to PNC - each of which has followed a similar playbook and rationale: the seller exiting sub-scale markets with the opportunity to drive cost savings and/or redeploy resources against higher return opportunities; the buyer amassing scale via manageable/non-transformational, financially attractive acquisitions.â

âThese moves are consistent with an accelerating shift, industry-wide, in favor of focus on home markets and on businesses, where a given bank can scale toward greater competitive advantage; we call this `Scaling Homeâ,â it said.

Credit Suisse said it expects âscaling homeâ to support a steady stream of strategic acquisitions and divestitures. It said analysis on the most global publicly traded banks - Citigroup, HSBC and Standard Chartered â shows that in each case, their new bosses have simplified the organizations, streamlining the consumer franchises. 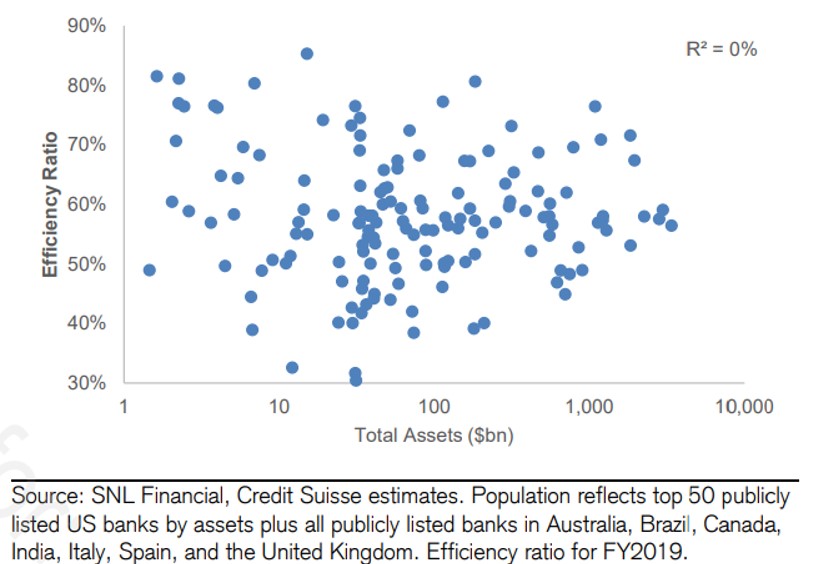 The report also showed huge variation in the fragmentation of banking markets in major economies. Measured by number of banks per $1.0 trillion of gross domestic product, Germany has the most banks (397) and China has just four. See chart below: 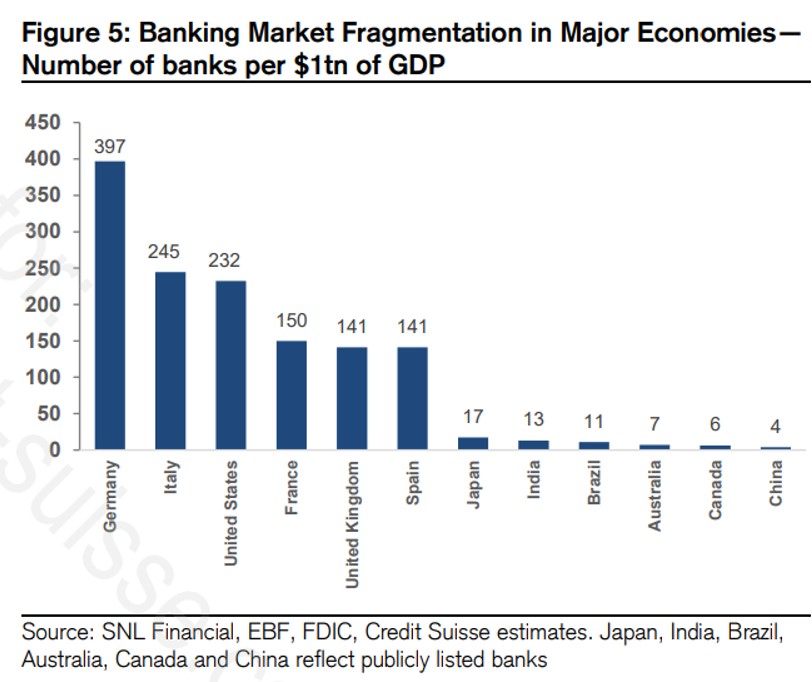