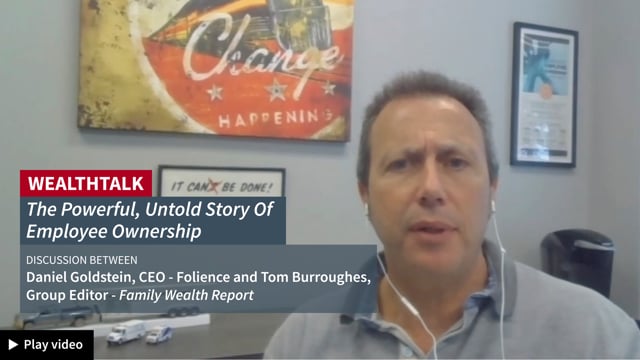 Employee share-ownership structures, encouraged by tax and regulations in the US, are nevertheless not as widely appreciated as tools for handling business transfer and succession as they should be. An advocate of this ownership model talks to Family Wealth Report.

Thereâs a bi-partisan consensus in Congress to encourage business owners to embrace employee-ownership as a way to transition business, a self-described evangelist for this model argues. (See video below.)

At a time when there is much focus on inequality, the urgent need to build retirement portfolios, and encourage more economic inclusion, the case for employee ownership models is getting stronger by the day, Daniel Goldstein told Family Wealth Report recently. (Goldstein works with a firm called Folience, which is a 100 per cent employee-owned diversified holding company. It acquires privately held businesses and transitions them to be employee-owned.)

Goldstein champions a structure called the Employee Stock Ownership Plan, or ESOP. An ESOP is a type of stock bonus plan; a defined contribution retirement plan that is designed to be funded with employer stock. Employer contributions into an ESOP are deductible in the year that they are actually made to the plan. The contribution can consist of cash or the employer corporation's stock. If a contribution is made in stock, the employer won't recognize any gain or loss on its taxes (source: www.lawyers.com). There is no 10 per cent early distribution tax on distributions that are dividends from an ESOP, even if a person receives them before 59Â½ years of age. An employer's tax-deductible contribution to an ESOP is capped at 25 per cent of the compensation paid or owed during the tax year to all of the plan's beneficiaries.

Earlier this year Goldstein testified to the US House Small Business Committee, and spoke on behalf of the ESOP Association. He was in Congress to stress the need for the US Department of Labor to provide regulatory guidance to improve the climate for ESOPs with the looming retirement of 2.5 million Baby Boomer business owners.

Goldstein is encouraged by how legislators in all parties are supportive of these ideas. The tax and regulatory regime is already in place â with laws going back to the mid-1970s -  but what is now needed is to make the public much more aware of the ESOP route, Goldstein told FWR.

His support for the idea comes at a time when wealth managers have been putting themselves forward to advise business owners on how to exit their business, whether by private equity sales, IPOs, transfer to offspring, or other routes.

Daniel also went into more detail about these ideas in this video segment with FWR editor Tom Burroughes.

To find out more about the Wealth Talk series, email the editor at tom.burroughes@wealthbriefing.com