FrÃ©dÃ©rique Carrier, managing director and head of investment strategy for RBC Wealth Management, examines the political scenarios and maps how the Brexit timetable has and will continue to weigh on sterling and UK economic fortunes.

As the UK plunges into the unknown, investors need to be nimble as the reality of Brexit evolves.
After taking power, UK Prime Minister Boris Johnson took little time making his Brexit intentions clear with a sweeping purge of the cabinet and filling it with many prominent Brexiters. His government has been laser-focused on delivering Brexit by October 31.

Johnsonâs stated preferred option is to negotiate the terms of a Withdrawal Agreement by which the UK would leave the EU. But should he fail in this endeavour, he would countenance a âno-dealâ Brexit, i.e., let the UK walk out of the EU on October 31 with no transition period and shift trade to World Trade Organization terms. To convince the EU and UK voters that he was serious about pursuing this option, he not only ratcheted up the no-deal rhetoric, but also had the Treasury earmark Â£8.3 billion to prepare for exiting the EU.

Gloves off
But his plan soon faced difficulties. Parliamentary arithmetic has in fact worsened. Following a recent by-election, the defection of a Conservative member of parliament (MP) to the Liberal Democrats, and the expulsion of 21 rebel Conservative MPs, Johnson now heads an inherently unstable minority government. Moreover, a majority of the House of Commons opposes a no-deal Brexit, as does a majority of the public, according to opinion polls.

The House of Commons recently wrestled control of parliamentary business from the government by voting to force Johnson to request an extension from the EU to delay Brexit until January 31, 2020, unless a deal on the terms of the exit is approved by Parliament. This, in effect, would avoid a no-deal Brexit in the autumn.

Given the unfavorable parliamentary arithmetic, the likelihood of a general election has now increased. Its result, given how divided the country is and the âfirst-past-the-postâ (or winner-take-all) system, remains as opaque as ever. At one end of the spectrum, a Conservative government could return and implement a no-deal Brexit. At the other end, a Labour/Liberal Democrat coalition could pursue a second referendum.

No clarity on how Brexit will unfold: How various scenarios would impact the UK economy over several years 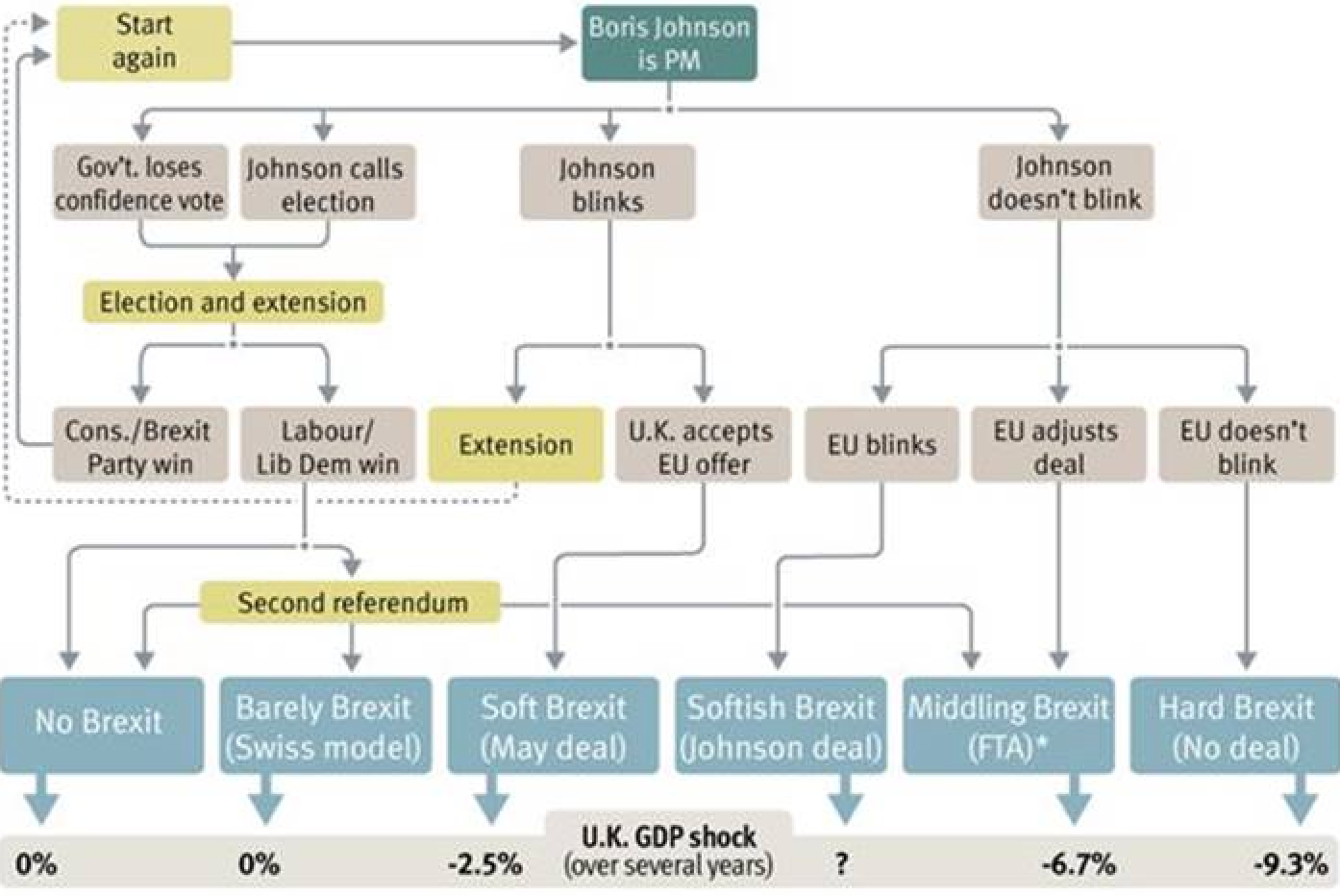 Fiscal stimulus anyone?
In a gambit which suggests positioning for an upcoming election, over the past few weeks Johnson announced a flurry of spending commitments and proposed tax changes at an unprecedented rate for a Conservative prime minister. He clearly intends to support the economy, which contracted by 0.2 per cent q/q in Q2.

But some perspective is needed. Some of this spending had already been promised by the previous administration, such as the funds earmarked for the National Health Service and the poorest cities and towns. Other proposals, such as infrastructure spending, would take years to plan and would require legislative approval, which could be problematic given the parliamentary arithmetic.

As for tax changes, their impact doesnât tend to be immediate. For one, they would mostly take effect in a new tax year, or not until April 2020 in this case. The value added tax (VAT), a sales tax, is an exception. The government lowered the VAT during the financial crisis, as it judged that this was the quickest and most direct way to put money in the pockets of households. Moreover, RBC Capital Markets points out that it has been common for major tax changes in the UK to be phased in over a number of fiscal tax years, rather than in one go - for example, the cut in the main corporate income tax rate from 28 per cent to 17 per cent occurred over a 10-year period.

For now, the prime minister expects this fiscal largesse will be paid by the countryâs fiscal headroom, the equivalent of spending oneâs overdraft limit. With the economy slowing, this headroom is expected to decline, so more borrowing is likely eventually.

What of the Bank of England?
As the governmentâs stated policy has been to continue to work towards a smooth Brexit, and as the fiscal plan has not yet made it into the budget officially, the Bank of England (BoE) has maintained its guidance for âincreases in interest rates at a gradual pace and to a limited extent.â But if the economy slows further, the BoE is likely to adopt a dovish stance. Indeed, RBC Capital Markets expects a 25 basis point (bps) cut at the BoEâs November meeting.

Should the Conservatives win a majority enabling them to pursue a no-deal Brexit, we believe the economy would need immediate support. This would be more readily effected by monetary policy rather than fiscal policy. In this situation, RBC Capital Markets projects there would be as much as a 50 bps cut and a resumption of quantitative easing.

Timeline of key Brexit events driving the pound: GBP/USD through its post-referendum low 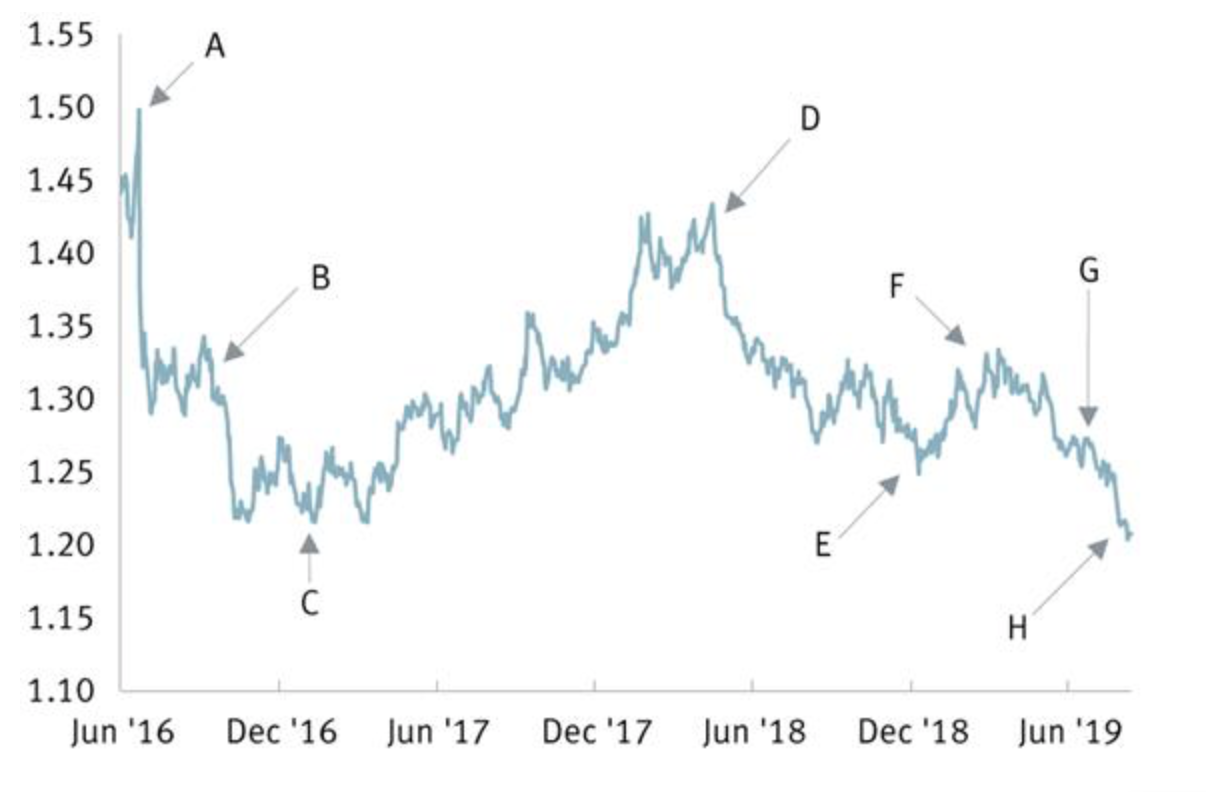 Sterling: Pounded
The pound was one of the worst-performing G10 currencies this summer, piercing through its post-Brexit referendum low against the US dollar, as Johnson ratcheted up the no-deal Brexit rhetoric. But should a change of government (Labour/Liberal Democrat coalition) herald the possibility of an exit with a deal in place or a second referendum, a substantial relief rally in the currency cannot be ruled out, given how deeply undervalued it has become. Conversely, a Conservative victory could lead to further underperformance.

Fixed income: Safety first
We anticipate continuing demand for the perceived safety of government bonds given heightened political uncertainty and therefore maintain our Market Weight view on government bonds with short-duration positioning. Our base case is that the BoE will become more accommodative.

Fiscal stimulus is not presently being priced into the market and this is likely to remain the case as it is unclear that the current minority government has the power to deliver it.

For now, we would not expect UK 10-year government bond yields, which have currently fallen to 0.48 per cent, to follow the upward move of US Treasuries that occurred in the aftermath of President Trumpâs election in November 2016. The effect of Brexit dampening growth prospects and heightening demand for safe-haven assets currently outweighs the risk yields may rise due to fiscal stimulus.

Sterling-denominated corporate credit provides relatively attractive valuations, though we would be prudent and avoid issues from companies exposed to the domestic economy.

Equities: A bargain bin?
We reiterate our Market Weight stance on UK equities given the low valuations, with the MSCI United Kingdom Index trading at a price-to-earnings multiple of below 12x 2020 consensus earnings estimates, and having an overall dividend yield of five per cent. Moreover, at some 22 per cent, the discount of the MSCI United Kingdom Index to the MSCI World Index is as deep as it has been in close to 10 years.

In the current uncertain environment, we believe that it makes sense to continue to focus on companies that generate revenues abroad in spite of their recent run of outperformance and often fuller valuations. Their repatriated earnings benefit from a weaker currency and feel less impact from the UKâs weak domestic outlook. In a no-deal scenario, we would expect the shares of these companies to continue to outperform, but we would be alert to opportunities in domestic-centric companies, which may become even more deeply discounted in any further selloff.

However, should a change of government increase the possibility of a second referendum or an exit from the EU with a deal, we would expect the pound to strengthen, which would crimp the upside potential of companies that generate a substantial percentage of revenues from international sources. And with better visibility on the economic outlook, we would expect some rotation into attractively valued domestic stocks.

Necessary to be nimble
It is not an overstatement to say that the uncertainty in the UK, given what is at stake, is unprecedented. September has already been a momentous month for headlines as Parliament has returned and the Brexit debate restarted in earnest. Investors should be alert and flexible as the reality of Brexit evolves.